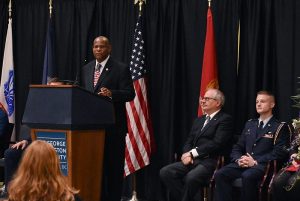 The National Defense ISAC Interim Executive Director, Major Carlos Kizzee, was honored to speak at the George Washington University 10th annual wreath-laying ceremony on November 9, 2018 to commemorate Veterans Day. Mr. Kizzee discussed the purpose of Veterans Day and the value of those who have served. Major Carlos Kizzee served as a career Marine Corps officer. His initial duties were as an Air Control Officer.  For the latter portion of his career, he served as an attorney; serving as a military attorney Prosecutor, Defense Counsel, Legal Assistance Counsel, and as a Federal Special Assistant United States Attorney in Arizona and in the Southern District of California.  Mr. Kizzee also served as Commander of the Marine Corps’ Headquarters and Services Battalion on Okinawa, Japan.  His final military assignment before military retirement was with the Navy Office of the General Counsel as the Marine Corps Deputy Area Counsel for the Pacific Area in Okinawa, Japan.

As a company focused on National Defense, veterans are a big part of who we are. NDISAC and our member companies take pride in employing veterans and continuously creating opportunities for veterans in the security field.

Here at NDISAC, we’d like to honor our NDISAC Executive Director, Major Carlos Kizzee, Board Member, Captain Wayne Boline, and Board of Directors Secretary, Captain Mark Ackerman. Click here for more details about their service.

Veterans who have served and protected the Nation are well-positioned to transition into much needed jobs, including roles in cybersecurity. The demand for cybersecurity experts is growing 12 times faster than the current U.S. job market, making cybersecurity one of the most highly sought-after careers in the country according to the Department of Homeland Security (DHS).

NDISAC is excited to offer our veteran members valuable opportunities and resources from DHS, to help them transition into their next mission: a rewarding career in cybersecurity. Click here to download a DHS Cybersecurity Training and Education Guide for Veterans to learn more about FREE training, scholarship opportunities, and other resources to help veterans launch a new career in protecting our nation’s information systems. DHS also recently released the newest version of the Veterans Cybersecurity Education and Training Toolkit. This toolkit outlines education and training resources including scholarships, free on-demand training, and a course catalog tool.

Thank you for your service to our country!

Read the full article about the wreath-laying ceremony on the The GW Hatchet, the George Washington University student newspaper. Below is a excerpt from the article and a link to The GW Hatchet article:
https://www.gwhatchet.com/2018/11/10/leblanc-gw-honor-military-students-at-veterans-day-ceremony/

The keynote speaker at the event – which honored past, current and future veterans – was Carlos Kizzee, the executive director of the National Defense ISAC and a former Marine Corps deputy area counsel in Okinawa, Japan. Kizzee was joined by University President Thomas LeBlanc, who spoke about the veteran community at GW.

Kizzee spoke about the purpose of Veterans Day — to honor soldiers and veterans who “are here today, still living” — and contrasted it with Memorial Day, which he said commemorates those who have died.

He called on the audience to recognize and support veterans regardless of their political beliefs about war and conflict.

“Let’s never, ever forget, no matter how we may feel about politics and reasons and rationale, that we are talking about people,” he said.

Kizzee said Veterans Day is a time to focus on the “reintegration” of soldiers into civilian life. He said it is not only the responsibility of the government to ensure that veterans are successfully reintegrated after service, but it is also a task for everyday citizens.

Kizzee said another focus of Veterans Day is about supporting young people who plan to join the military.

“There are people among us who are preparing to make that sacrifice, who are hearing that call to serve their country,” he said. “We need to remember them and we need to support them.”

Kizzee urged people not to doubt their decision to join the military because of a lack of diversity, adding that “a nation whose military does not reflect the nation is a huge liability.”